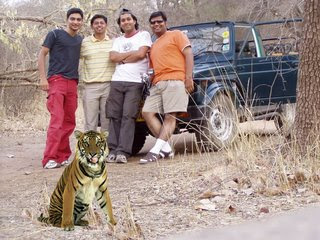 Here is an edited picture from out Ranthombar trip. Tiger is been inserted later on… :)

Email ThisBlogThis!Share to TwitterShare to FacebookShare to Pinterest
Labels: experience

Internet in India used to have many problems.

I used to have internet breakdown every monsoon. Local cable operators like Icenet, Ecom, Cablenet and Siticable used to run over head cables from one roof top to others. This was jumped thru low range hubs thus the result was crazy. As soon as it rains their service engineers were on their toes…to sort out the problems.

Now the scenrio has changed a bit. National companies like BSNL, RIL and VSNL are doing great. There internet backhaul is quite good, plus the quality of cabling over the building is also neat.This leads to a better - stable internet connection.

I guess things are not as bad as we think….
Posted by Vivek No comments:

$1.72 Billion: The Cost of Over-Night Computers

Thirty percent of corporate computers are not switched off at night. Or so says a studyfrom 1E, a power management software company.

Now, we should keep in mind that this study was done by a company trying to sell power management software, but these numbers are real, and so is the problem. Though, I will say that, in most places in America, there is excess power being produced at night anyhow, so saying that this resulted in an increase in greenhouse gasses is ultimately incorrect.

However, it has resulted in an almost 2 billion dollar gift to the fossil fuel-based power generation industry.

People see shutting down the PCs, or even putting them into sleep mode, as simply too much trouble. This was something that Vista was supposed to tackle, but it unclear what kind of impact Vista’s new power management features have had.
Of course, 1E also calculated the massive energy savings that could be achieved by installing their software…Up to $75 per PC. We wish that people weren’t so lazy, and that they could hibernate their own machines, but if it takes proprietary power management software to get companies to stop wasting all this energy, then I’m behind 1E in their efforts.

And if you want to save that $75 with some free software, check out CO2Saver.

By Hank Green Via Greener Computing
Posted by Vivek No comments:

Creativity at its best.  People can just paint things on any surface.

Yesterday I was amazed with MS paint and today this Dirty Car Art.

Check out : http://www.dirtycarart.com/gallery/index.htm and see what people can do with their dirty cars.
Posted by Vivek No comments:

Fight at the Greens

Two super duper player - one great match.  I hope Nadal makes to the final and wins the WimbledonÂ 2007 title by defeating Federer. This is going to be cricual match for both the players esp. federer as he wants to get into the record book, while for Nadal its something for the green. This master of Clay court needs to win on green surface + take revenage from last years finals’ defeat. Lets see. waiting for 8th july final which should be against Nadal-Federer and Nadal should take it…..
Posted by Vivek No comments:

Fight at the Greens

Two super duper playerÂ - one great match. Â I hope Nadal makes to the final and wins the WimbledonÂ 2007Â titleÂ byÂ defeatingÂ Federer.Â This is going to be cricual match for both the players esp. federer as he wants to get into the record book, while for Nadal its something for the green. This master of Clay court needs to win on green surface + take revenage from last years finals’ defeat. Lets see. waiting for 8th july final which should be against Nadal-Federer and Nadal should take it…..
Posted by Vivek No comments:

MS paint is one of the low level photo drawing software from Microsoft. It comes withWindows and very common to found. Â I was REALLY AMAZED to see the painting of Mona Lisa on MS Paint. Â Hats off to the painter and I guess this makes me think that…… somtimes there is a potential into the software/human being but we don’t know how to get the best out of it.

Link of the Painting: http://www.youtube.com/watch?v=uk2sPl_Z7ZU

Reduce interference on your wireless network

One of the biggest reasons for wireless interference is the use of 802.11g or 802.11b networks and 2.4GHz cordless phones. Router for those networks and 2.4GHz phones operate in the same frequency, and they’re competing with each other. This is exacerbated by the fact that they’re in the same room. Interference from wireless products in the 2.4GHz frequency is a known issue for 802.11g/b networks; even baby monitors and microwave ovens have been known to wreak havoc on Wi-Fi networks. You can try a number of things for free, or you can pony up for a new phone. First off, try moving the phone’s base unit into a different room from your router/access point. Also, try switching channels on router/access point. If these suggestions don’t work, you can invest in a cordless phone that uses a different frequency than your wireless network: 900MHz or 5.8GHz.

This article is by Felisa Yang, CNET Editor.And I recommend it to all the India Wireless HotSpot - Home Users.