The wait to savour fries of Jail Bhajiya without going to its stall at Ellisbridge is over. The Jail Mobile Bhajiya kiosk will start visiting different localities in the city after its inauguration in Gandhinagar on Wednesday. Additional Chief Secretary (Home) Balwant Singh and Chief General Manager of State Bank of India (SBI) TCA Ranganathan will do the honours.

Locating the mobile kiosk would not be an uphill task. You just have to dial a mobile number (9638972154) to spot it.

The mobile bhajiya van is a brainchild of IG (Prisons) Keshav Kumar. He mooted the idea a year ago.

“I was very excited to implement the scheme. It took a lot of time and efforts to execute the plan. My dream came true since the SBI showed keen interest in it,” said Kumar.

“The unique project is not aimed at making profit. Its objective is to reform and rehabilitate prisoners,” he added.

Ranganathan, the Chief General Manager of SBI (Gujarat Operation), said: “This is a unique thing. One has to think out-of-the-box for this kind of schemes. I was excited after learning about the plan and agreed to lend a helping hand for a social cause. This is an effort to reform and rehabilitate prisoners.”

The mobile bhajiya kiosk will visit different localities with three inmates of Sabarmati Central Jail and two police personnel. There will be an autorickshaw driver, too. The jail inmates will make bhajiyas, while the driver will steer the vehicle to different places. 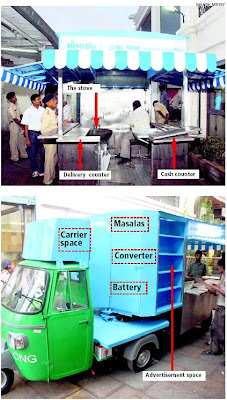