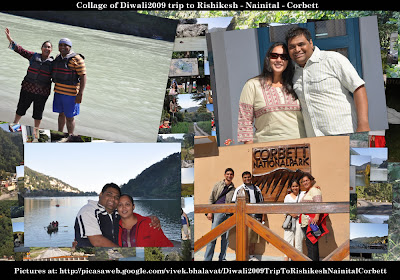 This Diwali (17th - 24th Oct.) we went to Rishikesh, Nainital and . The trip was quite adventurous and enjoying. We were accompanied by Priyank and Vibhuati at allthe locations.

As said earlier, we started our adventure right from Ahmedabad Railway station. We had booked the tickets from Ahmedabad to Haridwar. Our to Haridwar tickets were confirmed but the Ahmedabad-Delhi was in waiting list. We checked online status till the last moment but the waiting list didn't moved due to Diwali rush. In the end Miti and Vibhuati secured places in general bogie while me and priyank floated between AC coaches to bribe the TC. After Mehsana (2hr. from we took off) we got a confirmed seats and we started shifting. It took us three stations to shifts our luggage and our better halfs. Finally after two and a half hour we made it to the seats (thanks to the bribe system - I love my ). arrived at  5.30am and we shifted to our new location since we already had confirmed seats for that location.

At 12.30pm we arrived in Haridwar. We hired a cab/taxi (Tata Indigo) and went to Kodiyala via Haridwar and Rishikesh. We stopped at Laxman Joola, BharatDevi Mandir etc along the way. Our journey was also halted by a landslide on the way. Finally at 6pm we reached Kodiyala. It was a good hotel on the River Ganga. Our rooms were facing the river. We got ourselves some Rum and huddle around the camp fire as it was very cold.

Next day we checked out in the afternoon and headed for River Rafting from Shivpuri. We had one level 4, two level 3 and few level 2 rapids. We also jumped into the for swimming along the current. It was great workout and the water was very cold. After that we even did cliff (30 ft. high) diving. It was scary and it took me 10 min. to make up my mind and plunge. After river rafting we had our lunch and headed back to Haridwar (this time in personal Chakda – big auto ricksaw at damn cheap cost).

At midnight we had our train from Haridwar to Kathgodam. Before we reach our destination, a station before Kathgodam  – a taxi driver came to our bogie and gave the taxi rates. He told us to get the cab a station before the destination as it will be cheaper and faster (this is what I call aggressive marketing). We took the cab (Maruti Alto – yes 4 ppl. + luggage + driver) and went thru the snaky roads to Nainital. Those crooked roads made Miti to throw up several times along the way to top.

Finally after couple of hour’s taxi we reached Nainital. Our Hotel was fab. We had to take ropeway (cable car) to reach our hotel since it was on top of the hill. Our hotel was an old governor rest house and now converted into a heritage hotel (from 1920s). We had the best view of Nainital and mountains from our place. We roamed around the Naini lake and street of Nainital for next one day. We had good Vodka and camp fire in the evening at our hotel.

Next day we left for Corbett in afternoon and reached there in couple of hours (this time our taxi was a nice Toyota Innova). We stayed 14Kms outside Ramnagar (town were all the booking and trip to jungle begins) at Bailparaw. Our resort was very good and it was spread out into 5acres land. It had a nice swimming pool (which we never used due to cold), camp fire, gardens, landscaping, ducks with other wild lives, service staff and restaurant (except the GM of the hotel – who made us pay very high for our elephant ride and gave misleading advices about the safari rides). Next day we took an Elephant ride into the outer areas of the jungle and in the afternoon we had a nice Jeep safari ride into the jungle from Jhirna Gate. Unfortunately we didn’t see any tiger but some monkeys, deer, sambars. Overall the Jungle experience was great but the wildlife was disappointing. We were accompanied by a nice Ahmedabad based doctors during the jeep safari (which also brought down our expense).

Next day after breakfast we took a train from Ramnagar to . In we took Metro to Rajiv Chowk/Palica Baazar and then took the Metro again for railway station. Next days early morning we were back to Ahmedabad and thus finished our nice adventurous trip.

Pictures of this trip can be found at: http://picasaweb.google.com/vivek.bhalavat/Diwali2009TripToRishikeshNainitalCorbett