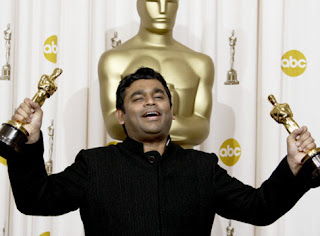 Well I was hoping for Rahman's award. And he did it. While eating my breakfast this morning, I was watching the Oscar Live on Star Movies ...... and I saw him winning it. I guess its not the biggest thing..but I am glad I was their to witness it (atleast Live on TV). Anyways done is done, it also make me think as who else has won the oscars so far...I knew Satyait Ray was awarded A special Award for the contribution to the World Cinema in 1992 - but I was surprised to know that a lady in 1982 was the first one to win an oscar. Well that lady was Bhanu Athaiya for her work in Gandhi(1982) as Costume Designer. So as of today.... there have been 4 people (total 5 oscars) winning oscars and A.R.Rahma to win two awards. Here is the list:

1. Bhanu Athaiya for Gandhi in 1982 as Costume Designer

2. Satyait Ray for special Award for the contribution to the World Cinema in 1992

3. Resul Pookutty for SlumdogMillionaire in 2009 as Best Sound Mixing

Also who can see that up untill now..only three movies have made it to the Best Foreign Language Film category. And those films are Mother India by Mehboob Khan(1957),  Salaam Bombay! by Mira Nair(1988) and Lagaan by Ashutosh Gowariker(2001)

You can find the complete list of films that's been sent for oscars by India here.

Oh..and yes.. Smile Pinki by Megan Mylan (story about a girl with a cleft lip based in India) also won the Oscar for best Documentary Short.