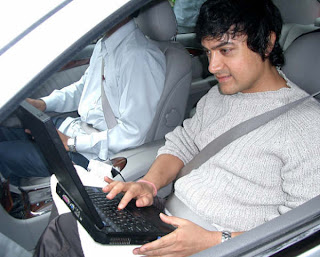 Aamir Khan does not employ a marketing agency to help him devise all those ideas behind his film promotions.

A few weeks before Ghajini was to release, I found Aamir Khan’s handwritten note resting at my desk. Although it is now old news that he had written personally to a select few journalists — a marketing gimmick of sorts — it was also a glimpse into the actor’s marketing skills.

Clearly a one-man army, whose endorsements aren’t managed by any celebrity management company (“he’s his own manager,” confirms a spokesperson at Spice PR, a company that does marketing for most of his films), Khan may not have beaten Shah Rukh Khan’s number one position in the endorsement market (source: TamAdEx, 2008), but still commands the highest fee, as an insider explains. “While others charge Rs 10-12 crore for a period of three-five years, Aamir Khan charges Rs 12 crore per endorsement for one year,” reveals this source.

According to his spokesperson, “Aamir has a wide net of endorsements, ranging from colas, to watches to mobile phones to even socially relevant causes. He works on just one condition; he needs to believe in the brand that he endorses.”

Little wonder then that people who’ve worked with him closely insist that Khan is so serious about his brand that if one meets him, he’ll be found drinking Diet Coke (for which he had, reportedly, charged Rs 6 crore in 2003 and renewed it recently for Rs 10 crore), eating Parle G between shots, wearing only Titan, driving an Innova, watching TV on Tata Sky at his residence and talking only, and only, on Samsung. What’s more, he also has two honorary endorsements including “Incredible India” — the commercials of which were on air recently — and the Lead India campaign. And though he doesn’t like delving into details, some of his friends say that Khan does make time to reach even far-flung destinations to teach children in the interiors of the country.

“He adds a very sharp sense of credibility in all his endorsements,” says Harish Bijoor, brand specialist and CEO, Harish Bijoor Consults, who has also met the actor personally. “He may not be the most down-to-earth person but that’s not what you see on screen,” he says, adding that Khan’s biggest asset in terms of endorsements is that he still remains one of the “freshest faces in the industry with immense experience and talent on his side”.

What’s more, says Bijoor, “while in most endorsement deals you don’t find an immediate connect, all of Aamir’s brands are immensely personal. You can feel his involvement in promoting the brands that he endorses.”

Khan works on the creative aspects of the advertisements personally and that’s a reason why, for instance, the marketing skills extend to almost all of his films that he supports and acts in. Ghajini’s release, for example, saw a special Samsung handset which was promoted in the film.

A leading multiplex owner reveals that before the release of the film, some multiplex owners even met the actor at his Panchgani residence where he worked a marketing campaign personally for Ghajini. What followed later was the now-famous haircut that was sported by employees in select multiplexes.

How does he manage to reinvent himself again and again? According to a Spice PR spokesperson, “Aamir doesn’t have any brand manager planning anything for him. He just does everything on his own. So if he believes in a cause, he’ll do it, not worried about what others might think.” Bijoor adds, “There’s one major difference between Aamir Khan and the others. Audiences, without putting him on a pedestal, can relate to him. They want to hear what he says, because he’s very seriously involved.” Prathap Suthan aka Pat, national creative director, Cheil Communications, feels that Khan fits the bill for the Incredible India campaign because he just carries tremendous respect. Suparna Mitra, global marketing head, Titan, says, “The fact that Aamir constantly reinvents himself — on his own — and is a leader in his field, makes it beneficial for us to have him as a brand ambassador.” Samsung, in fact, has emerged from the number four position to number two position in GSM handsets, within just a year of being associatewith the actor, says Asim Warsi, GM (marketing), mobile division, Samsung Electronics. Even Vikram Kaushik, CEO & MD, Tata Sky, feels that Aamir’s association with the brand has been immense. “He’s willing to take up challenges, even if it means having his face half made-up as a woman, and another half, as a man,” he adds, speaking about the Tata Sky advertisement that was on air sometime last year.

With films like Delhi Belly (an adult comedy) and 3 Idiots (loosely based on Chetan Bhagat’s Five Point Someone) coming out from his production stable, Khan is already working out logistics to promote them to his audiences. He knows the art of marketing and this time round too, success will continue to be Khan’s second name.