All IPL teams are making profits

If the IPL has stood all you thought you knew about cricket on its head, it’s done the same with finances too. In a year when franchisees were complaining about how shifting to South Africa would make a mess of their budgets, each one of them will end up with a profit.

If that’s not strange enough for your taste, try this: The two finalists, Royal Challengers and Team Hyderabad, would make a fraction of the profits that bottom-of-table Knight Riders will even if you take prize money into account.The main reason behind the healthier bottomlines is a huge jump in the share of revenues from broadcasting. Last year, each franchisee got Rs 25 crore from IPL as its share of the central broadcasting revenue pool. This year, that has more than doubled to Rs 67.50 crore each.

Franchisees won’t be the only ones partying. BCCI’s profit too, according to one estimate, jumped substantially to Rs 477 crore from Rs 350 crore last year. For good measure, broadcaster Sony Max is also likely to be in the black this year.

Had the matches been organised in India, it’s likely the teams’ profits would have been even higher because of higher receipts from ticket and merchandise sale, which have averaged Rs 8 crore and Rs 50 lakh respectively in South Africa. In 2008, teams like Knight Riders, Mumbai Indians and Team Delhi earned around Rs 20 crore from ticket sales alone as the capacity of their home stadiums was large enough to accommodate over 70,000 and the crowds just poured in. Team Jaipur tops profit table

Knight Riders, which finished lowest in the league table during the qualifying round in South Africa, will nevertheless end up with the third highest profit of Rs 2.8 crore in the second edition of IPL. Team Mohali, which also did not make it to the semis, will just beat Kolkata to second spot with a profit of Rs 26.1 crore, according to the IFL report.

In fact, the only semi-finalist which also stands to make over Rs 20 crore in profits is Delhi.

This is despite the fact that prize money in the IPL is a sizeable amount, with Rs 4.8 crore for winner, Rs 2.4 crore for the runners-up and 1.2 crore each for the losing semifinalists.For those who didn’t get past the league stage, the sums are correspondingly smaller — Rs 80 lakh for the team that finished fifth (Mohali), Rs 70 lakh for the sixth placed (Jaipur),Rs 50 lakh for the seventh (Mumbai Indians) and Rs 40 lakh for the lowest one.

The healthy bottomlines are a happy change from last year when besides Knight Riders and Jaipur, Team Chennai just scraped into the black due to its Rs 2.25-crore prize money for the runners-up position, according to a highly placed IPL source. 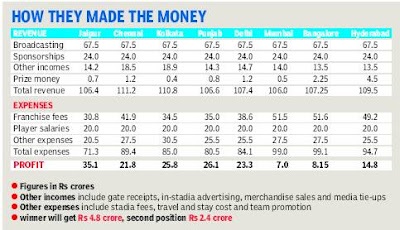