The inevitable ugliness of the IPL trophy 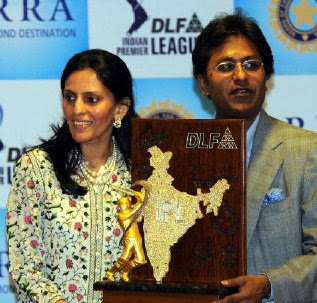 All right. It's time to talk about the IPL trophy. I've been resisting for a while, but we're inching closer to the semi-finals, everyone's hedging bets on their top four, and come May 24 one team is going to be holding aloft what might possibly be the ugliest trophy in the world, and newspapers everywhere are going to immortalise it in all its gaudy glory. Before this happens I think it's necessary to address not just the ugliness of the IPL trophy but the inevitability of its ugliness.

Whenever I haven't seen it in a while, I think to myself, "Is it really that bad?" But then the camera pans across the shimmering surface of it, or a commentator says something about the imaginative artistry of this masterpiece, and boom, the beast is back. What exactly is imaginative about it anyway? I mean, how long do you suppose it took someone to sit down and say, right: IPL, ergo India; cricket, ergo man with bat; sponsors, ergo DLF. Clunk it all on a wooden frame, chuck an obscene amount of diamonds and sapphires all over it, and then for the sake of being symbolic, throw in eight rubies for good measure to represent the franchises. Oh, I bet they were patting themselves on the back for thinking of that. Really? Is this Incredible India? Is this the best we could come up with?

On one hand I sympathise. It's not as if sporting trophies are the most inventive things. There isn't anything as iconic as the little gold man of the Oscars in the world of sport. We've got the Ashes, which are kind of like an enshrined stupa for the Australians and the English. Instead of an ossified Buddha's tooth you've got a burnt-up piece of bail. Great. We've got the green Masters jacket in golf, which is pretty different and comes with a wad of cash. That's nice. But by and large most sport trophies involve a ball of some sort, a man with bat/club/ball, or are plain old-fashioned jug-ears. So I can understand the need for departure, to do something special when the opportunity presents itself. Why have a boring old trophy when you see yourself as the purveyor of great change? Surely it would be an antithesis to radically alter the format of the game and to not have a suitably radical prize at the end of it? A trophy is a chance to say something big. I get that. But what exactly is the IPL trophy saying about India?

The problem is, this trophy stands for everything typical of a particular elite echelon of modern India. It is ostentatious, crass, bereft of any redeeming aesthetic qualities, and unashamed of all the above. To me it screams of insecurity. "Look!" it's trying to say, "I'm going to show you who's the boss now!" Count up those diamonds baby.

Don't get me wrong, I'm all for breaking off the shackles of colonisation and proving to the world that the money and ideas are where we're at. But I think it's pointless doing it without any sense of style. Especially when we come from a tradition where the very concept of beauty, or saundarya, has been codified and explored for centuries. I mean, this is a country where every context of beauty is covered, from the simple Kutchi village woman embroidering in her skirts, to a lovesick king depleting the state treasury to build a marble mausoleum for his dead wife. Beauty in India was in the day-to-day. It was not something artistic or out of reach, it was utilitarian. People surrounded themselves with ordinary objects of beauty because it was more pleasing to live that way.

All this has changed with modernity in India. We have been assaulted by a massive attack of ugliness. We have not only whole-heartedly taken to plastic and mass-production, we also seem to have lost all sense of proportion and design and relegated all our concepts of rasa and shringar to dusty textbooks. Walk around any Indian city now and you'll see how it suffers from this malaise of ugliness. It's in the glass high-rises directly copied from a street in New York; it's in the billboards, the dearth of trees, the lack of civic consciousness, and worse, in the innate belief that beauty is something to be bought or borrowed.

The IPL, which could have been a great platform for modern India to assert herself in an utterly unique way, has already chosen to take the path of commercial success over aesthetic glory. Fine. I understand that advertisers pay the bills. I'm willing to oversee those garish uniforms. I can tolerate any number of DLF maximums and Citi moments of success. But would it really have hurt anyone if, at the end of it all, there was a trophy worth its weight in gold to lift? To silence everyone just for a moment in a way that only something truly beautiful can?